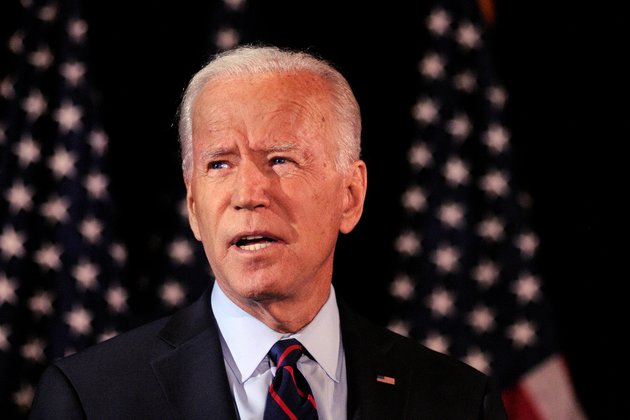 John Kerry got "Swift Boated" in 2004. For Hillary Clinton in 2016, it was her "damn emails." Remembering those failed Democratic presidential campaigns, Joe Biden is determined not to get "Ukrained" in 2020.

He has told supporters that he would beat Trump "like a drum" in a general election and that the Republican president is scared of that possibility. Biden has demanded that reporters "ask the right questions" and accused Trump of trying to "hijack" the campaign with unfounded assertions that Biden and his son Hunter had corrupt dealings in Ukrainian business and politics.

Biden has built his campaign around the idea that he can return Washington to a more stable pre-Trump era. But Biden's ability to win will turn on his ability to navigate the turbulent, no-holds-barred vortex that Trump has imposed on American politics with his Twitter megaphone, deep well of campaign cash and phalanx of surrogates.

And while many Democratic strategists and Biden supporters give him plaudits for pushback, there remain some worries about how the storyline might affect Biden's tenuous front-runner status.

"It's really a no-win situation," said Karen Finney, an adviser to Clinton in 2016, when the former secretary of state was besieged with media scrutiny and Trump criticism over her use of a private email server when she ran the State Department.

Finney credited the Biden campaign for "working the refs" by sending detailed memos to the media explaining the timeline of Hunter Biden's service on a Ukrainian energy company board and Joe Biden's involvement in Ukraine as vice president and for pressuring television executives not to give a platform to Rudy Giuliani, the president's personal attorney.

Giuliani has alleged that Biden, while vice president, tried to quash a Ukrainian investigation of the company that paid Hunter Biden as a board member. The top Ukrainian prosecutor said earlier this year that his team found no wrongdoing, and there's no evidence that U.S. law enforcement has gotten involved.

Trump, nonetheless, raised his theory in a July telephone conversation with the new Ukrainian president, asking Volodymyr Zelenskiy to investigate the Bidens anew. That move, now the center of a formal whistleblower complaint and the House impeachment inquiry, could be found to violate U.S. law making it a crime to solicit or accept foreign contributions in an American election.

"This is about Donald Trump, not Joe Biden," said Barry Goodman, a Michigan attorney and major Biden donor.

But a media cacophony can smother any argument, Finney said, pointing back to Clinton and to Kerry's 2004 campaign. Kerry, a Vietnam War veteran who'd earned a Silver Star, Bronze Star and three Purple Hearts for his service, was criticized in the summer of 2004 by a group of Vietnam veterans who - contrary to military records - questioned the service accounts that resulted in his recognition. Kerry was later admonished for not aggressively counterattacking the "Swift Boat Veterans for Truth," despite his campaign releasing his military records.

"It's just a tough situation," Finney said, putting the onus on the media "to not get sucked in."

Goodman, the Biden donor, said he's pleased with the campaign's strategy. But he said there are other ways to stay on offense - and not necessarily against Trump. Biden must also push back against Sens. Elizabeth Warren and Bernie Sanders, his chief progressive rivals for the Democratic nomination.

"Many Democrats are scared ... of 'Medicare for All' and losing their private health insurance," Goodman said, referring to single-payer health insurance proposals from Sanders and Warren. Goodman noted an ongoing United Auto Workers strike in Michigan. "Those people are striking to keep the health care they have," he said, recommending that Biden go to Michigan and turn the issue around on his primary rivals.

"I think that a certain amount of dirt will stick to him, even if it shouldn't," said Lee Williams, 69, of Fort Mill, South Carolina. A retired Navy officer, Williams backs Warren, even though he says his politics align with the more centrist Biden. "The fact is," Williams says, "that truth doesn't matter to Trump, so on the campaign trail, all you will hear is Biden, corruption, Ukraine."

In New Hampshire, Ellen Bowles, a 71-year-old retired middle school teacher, said she is uncomfortable with people using their influence even if there's no wrongdoing. Biden had been her second choice among Democrats behind Warren, but that's no longer the case.

"I think (Biden's) going to have to talk a lot more about what his son was doing in Ukraine," Bowles said. "I just feel that he's going to get tainted by that somehow."