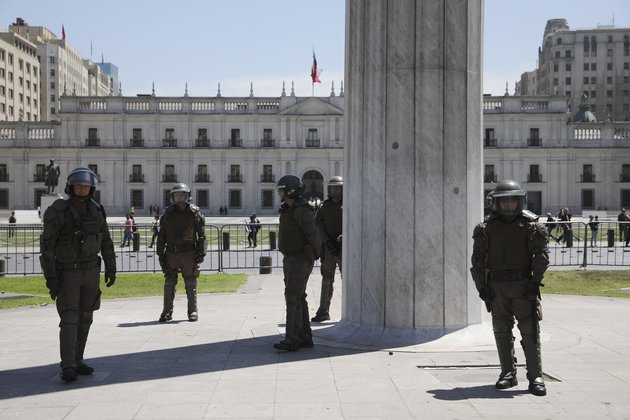 WHITE HOUSE - White House officials were caught by surprise with Chile's announcement it is cancelling two summits, including one President Donald Trump was to attend next month where he was to meet Chinese President Xi Jinping and other leaders.

Chilean President Sebastian Pinera announced Wednesday that due to continuing anti-government protests in Santiago, his country will no longer host the Asian Pacific Economic Cooperation (APEC) summit in mid-November as well as the COP25 climate summit in early December.

"This has been a very tough decision," Pinera told reporters, saying it was "based on the wise principle of common sense."

As president, Pinera added, he "must always put his compatriots above all else."

His main concern, Pinera explained "is reestablishing public order, our citizens' safety and social peace along with pushing through a social agenda to respond to the main demands of our citizens.

"As of now, it appears APEC will not occur in Chile, and it's our understanding the organization does not currently have a secondary site prepared," says White House Principal Deputy Press Secretary Hogan Gidley. "We're awaiting potential information regarding another location."

Some White House officials learned of the cancellation from reporters' tweets and it is not know whether Pinera informed Trump before he spoke to reporters in Santiago.

Trump has repeatedly said he expected to use the APEC summit as a venue to sign "phase one" of a bilateral trade agreement with the Chinese president.

"We look forward to finalizing Phase One of the historic trade deal with China within the same time frame, and when we have an announcement, we'll let you know," said Gidley.

At the United Nations, a spokesman said Pinera informed Secretary-General Antonio Guterres by telephone Wednesday morning that Chile "would not be in a position to host the COP25 meeting." Pinera also informed Patricia Espinosa, head of the U.N. Framework Convention on Climate Change (UNFCCC), which is organizing the conference.

Thousands of participants were expected to attend the stock-taking session on global climate action scheduled for Dec. 2-19 in Santiago. The UNFCCC is now exploring options to move the massive conference to an alternative host country, with barely a month to go.

"There have been past precedents of cases where the hosting country is not the same as the venue country. That could be the same in this case," U.N. spokesman Farhan Haq told reporters. He said he expected Chile would continue to serve as president of COP25.

Protests in Chile began Oct. 18 over a 4% increase in subway fares in Santiago have spread across the nation, inflamed by the frustration of ordinary Chileans who feel they have been left out of the prosperity of Latin America's wealthiest country.

'So Much Damage': Chile Protests Flare Back Up as Reforms Fall Short Chileans took to the streets again on Tuesday, pouring by the thousands into plazas and shutting down main boulevards

Clashes broke out between protesters and security forces on Monday - the same day President Pinera replaced eight cabinet members in an attempt to tame the country's political crisis.

While most of the protests have been peaceful, some have turned violent, leaving at least 20 people dead.

The protesters are seeking improved economic equality in the country, as well as reforms in the pension and medical systems.

Pinera, a center-right billionaire, last week offered a host of proposals to try to calm the protesters, including a raise in the minimum wage and pensions as well as lower prices for medicines and public transportation.

Margaret Besheer contributed to this report.