The Week In Russia: The Great And The Not So Good 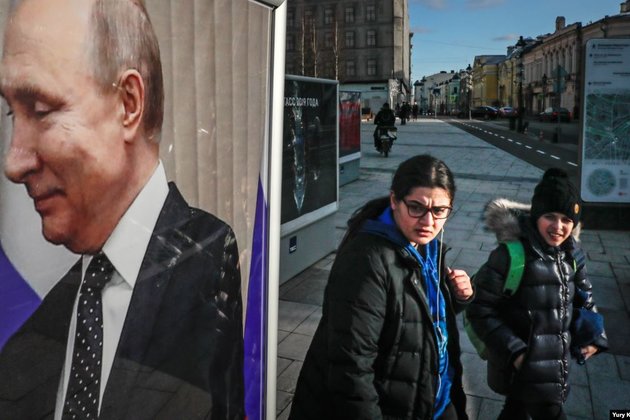 To receive Steve Gutterman's Week In Russia each week via e-mail, subscribe by clicking here.

President Vladimir Putin has made Russia great again -- but after 20 years of his dominance, it's not all that good.

That's how many citizens see it, a report based on a series of opinion polls and released on January 30 by the Carnegie Moscow Center suggests.

An August 2017 survey conducted by the Moscow think tank and independent pollster Levada Center "revealed that Russians wanted their government to shift its focus from foreign to domestic policy," the report by Andrei Kolesnikov and Denis Volkov said.

"As Russia had already become 'great again' thanks to Putin's perceived foreign policy successes, respondents indicated that it was time to concentrate on the domestic economy and social issues," it said. "The euphoric effect of the 2014 takeover of Crimea from Ukraine had slowly worn off."

By 2019 -- after an unpopular pension reform that raised the retirement age in a country where life, on average, is shorter than most -- the appetite for improvements within Russia had only grown more voracious: A poll conducted in July showed that 59 percent believed that "decisive, comprehensive changes" were needed, up from 42 percent in 2017.

When respondents were asked what needed to change first, by far the most answers -- 24 percent -- involved raising salaries, pension, or living standards. The third most frequent response -- after a change of government, the president, or the regime, at 13 percent -- was lower utility payments, medical costs, or food prices.

And many other respondents in the survey of 1,600 Russians nationwide also put changes that would help them stay afloat financially -- more jobs, cheaper education, the redistribution of wealth in Russia, where the richest 1 percent own more than 58 percent of the total wealth, according to a 2019 report by Credit Suisse -- as the top priority.

Putin visits a local children's clinic in the town of Usman in the Lipetsk region on January 22.

Poll results paint a fairly gray picture, by definition showing numbers, not names and faces, but media reports can fill in the blanks. Articles about struggling hospitals, patients, and staff, for example, provide some of the desperate details behind poll respondents' calls for affordable health care, higher living standards, and support for rural regions.

Putin is aware of the growing desire for change for the better. As the article accompanying the Carnegie Moscow Center report points out, he said in his January 15 state-of-the-nation address that Russian "society is clearly demonstrating a demand for change. People want development."

"The pace of change must be expedited every year and produce tangible results in attaining worthy living standards that would be clearly perceived by the people," Putin said.

That wording was itself a change for Putin, who had made calls for a "breakthrough" his mantra in recent years. That term could suggest that what's needed is not change but new ideas - or simply harder work.

After his speech, of course, Putin immediately made changes. He sent longtime Prime Minister Dmitry Medvedev's government packing and followed up on his call for constitutional amendments by submitting proposed changes to parliament. They may be the law of the land by the end of April.

A number of Putin's proposals are clearly designed to create the kind of change that is in particular demand, or at least the appearance of it. In the speech, he called for higher spending on social-welfare initiatives, and his amendments would - will, it's safe to say -- enshrine both the indexation of pensions and a minimum wage that is above the poverty line in the Russian Constitution.

His government shake-up, meanwhile, may have been meant to please the 13 percent of Russians who, according to the 2019 poll, said that the first priority was to change the government, president, or regime.

That's one out of three, so far, if anyone's counting.

And if Putin has made anything about his future clear in a series of remarks on the subject since late last year, it's that he will not be president in 2025, the year after an election in which the existing constitutional limit of two straight terms bars him from getting on the ballot.

As for regime change, that is not on offer -- and in fact, one goal of the changes that are on offer may be to ensure it doesn't happen. Even the planned alterations of the power structure - among them additional authority for parliament and possibly a stronger role for the State Council, which at the moment exists essentially for show -- may not mean a fundamental change in the way Russia is ruled.

At this point, one unknown factor is how Putin fits in: Will he use the reshuffle to retain power -- and if so, how much?

The answer could conceivably lie anywhere between almost none and almost all.

One proposal that the Russian officials handling the process of constitutional change say they have received would create the position of "supreme leader" - a title reminiscent of the "national leader" moniker that was being batted about as a possibility for Putin when he was considering whether to run in the 2012 presidential election.

The source of the "supreme leader" proposal, if it is authentic at all, has not been revealed. But regardless of whether it was planted by the Kremlin, whose poker-faced spokesman claimed that Putin has no opinion about the idea, its effect is to set a sky-high, virtually nonexistent upper limit on the amount of power he might lay claim to after 2024.

Some observers say Putin is not interested in power for power's sake.

Anna Arutunyan, senior Russia analyst at the International Crisis Group, suggested in a Twitter thread on January 16 that he has other motives for holding onto power now - and, presumably, for potentially keeping a hand or two on Russia's reins when he is no longer president as well.

Among them: A lack of confidence in the Russian people -- whose rights, critics charge, he has assiduously curbed over 20 years at the helm -- to build strong institutions.

"Putin, incorrectly, I think, sees citizens as not ready for democracy," Arutunyan wrote.

Whatever the motive, the last time Putin had a big, obvious opportunity to step aside he did he opposite, stepping back in as president in 2012 after four years as prime minister.

In a Twitter thread on February 6, political analyst Sam Greene recalled the day in 2011 when that decision was announced by Putin and Medvedev, deeply disappointing millions of their compatriots who had seen it coming but "had allowed themselves to imagine something else."

Those people, he wrote, "had allowed themselves to begin to believe that a different Russia was possible."

Now back to the global stage: If Russia is arguably great again abroad, critics say it's not very good.

Take Syria: The prominent role Russia has played since it stepped in with air strikes and a stronger military presence on the ground nearly five years ago is the clearest example of its newfound clout.

But Moscow faces flak from rights groups and Western governments over two major aspects of its involvement: Its methods and the side it backs - the government of Syrian President Bashar al-Assad, whose crackdown on protests nine years ago set off the war that has killed hundreds of thousands of people and driven millions from their homes.

The U.S. special representative for Syria engagement, James Jeffrey, raised questions about Moscow's methods and goals in remarks on February 6 about the situation in Idlib, the northwestern province that is the last rebel stronghold.

Russia is being "very difficult" in the United Nations on the issue of the humanitarian situation on Syria's border with Turkey and on attempts to get aid into areas that are not controlled by Assad's government, Jeffrey told reporters at a briefing on February 6.

Permanent UN Security Council member Russia used its veto to block "our efforts to try to get a decent UN resolution to keep the border crossings in the northeast open," Jeffrey said, "and we think that the northwest will be next."

More broadly, the United States has urged Russia "to accept a step-by-step comprehensive solution" to the "extremely dangerous conflict," he said. "It needs to be brought to an end. Russia needs to change its policies.