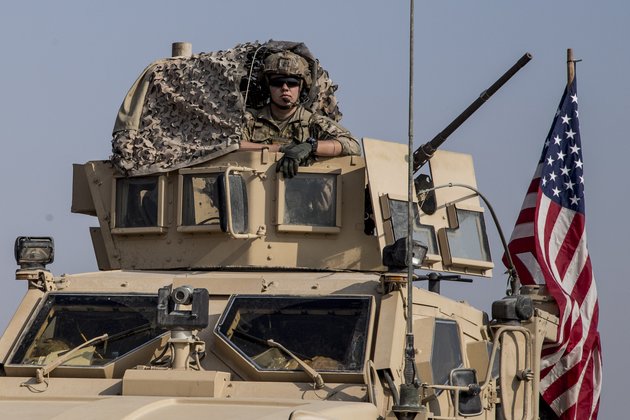 WASHINGTON - U.S.-led coalition special operation forces hit back against an Islamic State cell in Syria, capturing a midlevel leader linked to a rise in attacks by the terror group in the Deir el-Zour countryside.

The raid was at least the second in the Deir el-Zour area in the past week. An SDF-led operation on May 1 resulted in the arrest of an IS cell in Hajin that had been targeting U.S.-backed forces in the eastern countryside of Deir el-Zour.

It also came as SDF commanders continue to raise concerns about what they see as a sizable increase in IS operations over the past month.

A source close to the SDF told VOA that many of the attacks have involved improvised explosive devices (IEDs), but that attacks involving IS fighters have been increasingly lethal.

Coalition officials admit there is reason for concern, but caution against interpreting the surge in activity as a sign the terror group is close to regaining its former strength, either in Syria or in Iraq.

"There is an increase in Daesh activity this time of year, but that activity is significantly diminished compared to this time in 2019," according to Lieutenant Colonel Savannah Halleaux, with the coalition's Special Operations Joint Task Force, using the Arabic acronym for the Islamic State.

"Despite what Daesh remnants are advertising, their attacks in Iraq are far less than in previous years," Halleaux said. "They are attempting to keep themselves relevant through disinformation on social media, regular media, and amplifying their messages for recruitment."

Coalition officials also point out that IS efforts to assert itself are not going unanswered.

"The recent flurry of ISIS activity has been met by a blizzard," coalition spokesman Colonel Myles Caggins said, referring to a series of operations carried out by Iraqi security forces in recent weeks, sometimes with the help of coalition air power.

Other key officials have also pushed back against the spreading narrative of a resurgent and more capable IS due in part to the coronavirus pandemic.

"We do not believe that ISIS has been able to exploit seriously the COVID crisis to advance in the northeast [of Syria]," said Ambassador James Jeffrey, the U.S. special representative for Syria, using another acronym for the terror group.

"The area around Deir el-Zour is, as we say these days, a hot spot. We're watching that closely, but we are confident that we have it under control," he added.

Despite the collapse of the group's self-declared caliphate last March, intelligence estimates indicate IS still commands at least 14,000 fighters across Syria and Iraq.

Intelligence officials also note that there has been little disruption to IS activity in Iraq and Syria since a U.S. operation led to the death of former IS leader Abu Bakr al-Baghdadi in October 2019.

Instead, they say, the group's new leader,  Abu Ibrahim al-Hashimi al-Qurashi, has helped make sure IS has continued with its slow but steady resurgence in both Iraq and Syria.

"They're following the same playbook as they did previously. Nothing new or innovative about what they are doing," said Aaron Zelin, a fellow at the Washington Institute for Near East Policy.

"It is true that some attacks are also more qualitative than the recent past, but still don't have the sophistication as previously overall," he said. "Definitely something to continue to track and watch to see if it gets worse, but now it's still a bit early to say they are where they had been, say, from 2014 to 2016."

More worrisome are indications IS has been able to surge more successfully in areas beyond the coalition's reach, including Syria's Badiya Desert, which has largely been abandoned by forces loyal to the government of Syrian President Bashar al-Assad as they focus their efforts elsewhere.

"That is of great concern to us," Jeffrey said. "We have seen ISIS gaining ground there, attacking even towns, and at least briefly holding territory."