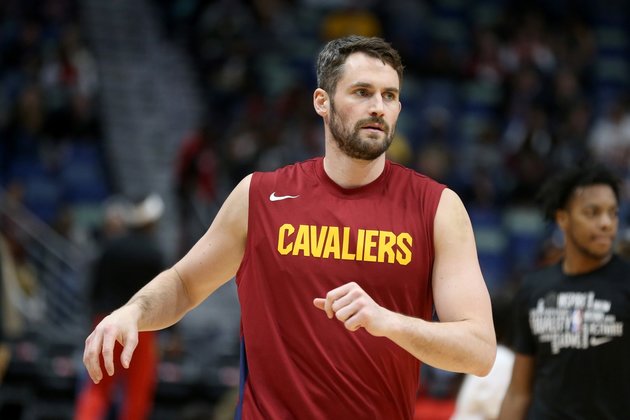 The five-time All-Star began revealing his battles with mental health in 2018 and has been working to remove the stigma from mental-health issues through the Kevin Love Foundation."It is an absolute honor to receive this award and I am incredibly humbled by it," Love said in a statement. "In telling my story, if I can help just one child that is suffering to make sense of what they are experiencing, I know my efforts have been worth it.

"And I hope one day we are able to erase the stigma around mental illness, starting with public conversations around mental health and encouraging people to seek help when they need it, followed by research, action, and change."

Love revealed his issues through a first-person article in The Players' Tribune and described his battles with panic attacks and heavy anxiety. He said one of his panic attacks came during a game.

Two-plus years later, Love joins the list of athletes who have made a mark on issues outside the sporting realm.

"I'm incredibly humbled by it," Love said. "It's really a profound honor if you look back at that group of men and women who I admire. Billie Jean King, Muhammad Ali, Bill Russell, to name a few. It's very, very humbling to see my name next to those. I just feel like I have so much more work to do. Those are people who put in a lifetime of work. With my name next to theirs, I have an obligation and opportunity to make a lot of change in the world of mental health."

Love also is in awe of mentioning in the company of the late Ashe, a fellow UCLA product, who fought through segregation to become of the top men's tennis players in the world.

"I know what Arthur Ashe stood for and what he was about, especially being around UCLA," Love said. "It's just tough for me even now to put it into words what this means because it's so much bigger than the realm of sports."

"When we started thinking about what the world is going through and our nation is going through -- the degree to which his ability to continue to reach out during the pandemic to audiences and help people -- we just thought this was the perfect time to recognize how important speaking his truth and then making it easier for others has become," King said in a statement.

"He has not only just talked about mental well-being, he's really helped folks understand that some of the stereotypical, rub-some-dirt-on-it stuff that athletes, male athletes in particular, are charged with is unnecessary and unhealthy. We thought that this was perfectly in keeping with the tradition of all of the fantastic people who have previously received this honor."

The ESPYS will be held virtually this year due to the coronavirus pandemic. Women's basketball player Sue Bird, women's soccer player Megan Rapinoe and NFL quarterback Russell Wilson are the co-hosts.