China Plows Ahead with High-Speed Rail Line for Southeast Asia 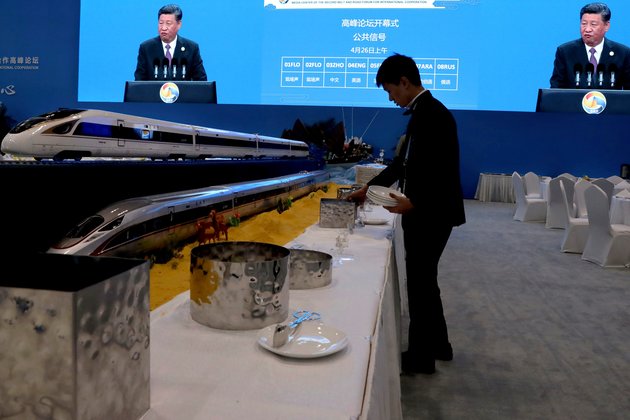 KUALA LUMPUR, MALAYSIA - The coronavirus pandemic sweeping the globe looks to have done little, at least in Laos, to slow China's grand plans for a high-speed rail line linking its landlocked interior to the bustling ports of Singapore through mainland Southeast Asia.

Work crews started laying track along the first 414-kilometer leg of the line through the country in March, five years after breaking ground. With most of the many dozen tunnels and bridges it will need to cut through Laos' mountainous north now bored and built, state media this month reported that the $6 billion project was 90% done. Service is set to start by 2022.

Analysts say the full line remains a vital part of Beijing's Belt and Road Initiative. Starting in Kunming, the capital of China's Yunnan province, it will help the remote region tap into some of Southeast Asia's largest economies, while boosting China's political sway over them in the process.

"The rail from Kunming to Singapore is a high priority for China. It will allow poor regions of western China, which are now landlocked, increased access to wealthier parts of Southeast Asia. It will boost trade and tourism," said Murray Hiebert, a senior associate of the Southeast Asia Program at the Center for Strategic and International Studies in Washington.

He noted the competing claims some of them have with Beijing in the South China Sea and the Chinese dams they blame for choking off the Mekong River and exacerbating droughts in recent years.

A bird's-eye view of the planned route would show it winding through Laos, Thailand and Malaysia before reaching Singapore, hitting the countries' capitals of Vientiane, Bangkok and Kuala Lumpur along the way.

"It will provide a big push for China to expand its economic influence [and] to eventually dominate mainland Southeast Asia; I think that's going to be a long-term objective," said Prapat Thapchatree, who heads the Center for ASEAN (Association of Southeast Asian Nations) Studies at Thailand's Thammasat University.

Laos has embraced the project warmly, hoping it will transform one of Southeast Asia's poorest countries from landlocked to "land-linked" and draw new business from a line that promises to send more trade and tourists each way. It will turn what is a three-day slog from Boten on Laos' border with China to the capital of Vientiane, on its border with Thailand, into a three-hour jaunt.

However, the potential rewards come with some risk.

A 2018 report by the U.S.-based Center for Global Development lists Laos among the countries hosting BRI projects that face the highest debt risk. A more recent report on BRI debts by Australia's Lowy Institute said Laos owed more of its foreign debt to China, some 45%, than any of the other nine countries selected for its study. Much of it is going to pay for the railway. The government has borrowed about $1.5 billion from the state-owned Export-Import Bank of China to help pay for its 30% stake in the project, according to the Institute for Southeast Asian Studies in Singapore.

Critics of China's "debt diplomacy" say Beijing is pulling those financial strings to have Laos do its bidding within ASEAN. As a member of the 10-nation bloc, Laos stands accused of helping spoil efforts to mount a united front against Beijing's sweeping South China Sea claims.

"At a regional level, China has used Laos as a wedge against other countries in ASEAN," said Elliot Brennan, a Southeast Asia analyst and research fellow at Sweden's Institute for Security and Development Policy.

The leg of the new rail line running through Laos will be of little use to China if it can't extend the route south, keen as it is to connect with Southeast Asia's larger economies.

However, Prapat said Thailand and Malaysia are more reluctant to be drawn much further into China's orbit and, unlike Laos, have the clout to be coy and dictate terms.

"Thailand is very cautious, very concerned about what's happening in Laos and in Cambodia, when these two countries are too dependent on China," he said, likening them to de facto provinces of their giant neighbor.

Thailand and Malaysia are proving more practical about the project as well.

"Even after the military coup in 2014 when the regime in Bangkok was shunned by many Western governments and China was one of its only friends, the generals played very hard to get because the high-speed train China was proposing was very expensive and not a priority for the Thai leadership," said Hiebert.

Thailand has moved cautiously in reaching a deal with China to build the route from Laos to Bangkok over cost concerns, and put off plans to sign the contract in December. Malaysia even froze work on its leg of the line from Thailand to Kuala Lumpur for nearly a year and agreed to start up again in April 2019 only after convincing China to slash the original $20 billion price tag by about a third.

Analysts say China's dreams of a high-speed rail line running the length of mainland Southeast Asia will be a harder sell still after the heavy hit the region's economies have taken from the pandemic.

Until the line does finally pull into Singapore, Prapat said, "it's going to be a long way to go."