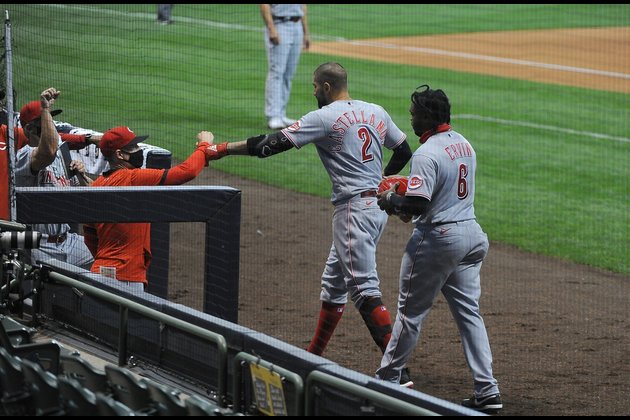 Following a much-needed breakout win, the Cincinnati Reds need to start stringing together some victories. They will try for a second straight win over the host Milwaukee Brewers on Saturday night.

Mired in a three-game slide and shut out in their previous two contests by Cleveland, Cincinnati used a six-run second inning to snap a 24-inning scoreless streak in Friday's 8-3 victory at Milwaukee. Matt Davidson's three-run homer highlighted the inning for the Reds, who were held to three or fewer runs in five of their previous seven contests.

With the additions of Nick Castellanos and former Brewer Mike Moustakas, the Reds began 2020 with some lofty expectations. Instead, they are two games under .500 through 14 games of this condensed season. They still believe they're capable of getting on a roll.

"We have all the confidence in the world that we've got a good team," president of baseball operations Dick Williams told the Reds' official website. "We know time is of the essence.

"I believe the guys will get real hot soon and start playing up to their potential."

Castellanos, who ripped a two-run homer and drove in three runs on Friday, is already hot, batting .340 with seven homers and 16 RBIs. Moustakas, meanwhile, will miss this entire weekend series against his former team with a quadriceps issue.

Cincinnati starter Anthony DeSclafani will make his second start of the season for the Reds, and he has a tough act to follow. Fellow right-hander held the Brewers to one run and three hits while striking out 12 on Friday night.

In his season debut on Sunday, DeSclafani allowed three hits over five scoreless innings but did not factor in the decision of Cincinnati's 4-3 in Detroit. DeSclafani is 3-4 with a 5.23 ERA in 10 appearances (nine starts) against the Brewers, and just 1-4 with a 5.83 ERA at Milwaukee.

Cincinnati pitchers have recorded a majors-best 165 strikeouts. Bauer and three relievers contributed 16 of those on Friday.

Brewers star Christian Yelich struck out twice and hit a two-run home run on Friday, and he'll be trying to build upon his previous success against DeSclafani. The 2018 NL MVP, who was runner-up in 2019, is 8 of 18 with three doubles and two homers against DeSclafani.

Yelich, though, is trying to recover from a rough start and enters Saturday hitting just .125 (5 for 40). Three of those hits have been home runs.

"When you're going through it, it feels like the game is impossible," Yelich told the Brewers' official website. "Then one day it turns back to normal. You just don't know when that's going to be."

The Brewers, who had won two in a row prior to Friday's setback, will try a fourth time for their first home victory of 2020 behind scheduled starter Brett Anderson (0-0, 6.00 ERA). The left-hander hopes for a better effort after he gave up two runs and five hits over three innings while not factoring in the decision of a 6-4 home loss to the Chicago White Sox on Monday.

Anderson took a comebacker off his foot in the first inning of that contest, but appears healthy enough to make this start. He's 2-1 with a 5.40 ERA in four starts versus Cincinnati.

Castellanos is 3 for 9 with a double versus Anderson. Teammate Joey Votto, who did not play in Friday's series opener, is 4 for 11 against him.