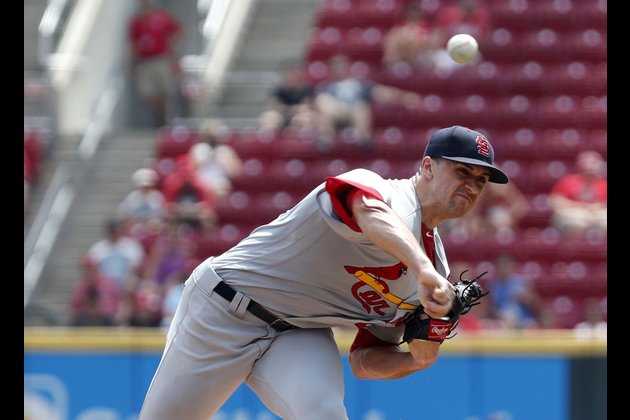 The Cincinnati Reds and Kansas City Royals will play a doubleheader Wednesday, as a result of the postponement of Tuesday's scheduled game.

In the first game, the Reds will send Luis Castillo to the mound to face the Royals' Brad Keller. Both pitchers will be starting against the same opponent asthey did in their last starts in Cincinnati last week, which happened to be their first career appearance against that opponent.

In the nightcap, veterans Trevor Bauer of the Indians and Matt Harvey of the Royals will face off in an intriguing matchup.

The games will be the Reds' first since their season was put on hold following Friday's 8-1 victory over the Pirates because a player tested positive for COVID-19. Tuesday's delay stretched it one day longer.

"It's been stressful," Cincinnati catcher Tucker Barnhart said. "Selfishly, I sent my family home because of the unsure nature of everything that's going on. Having to be away from them longer than I anticipated has been tough. But this is what we signed up for, so we have to put it in the rear-view and get ready to play ball."

Castillo gave up one earned run on seven hits in six innings, walking two and striking out five, in his start against Kansas City on Aug. 11. The bullpen gave up the lead late before the Reds won in 10 innings.

Keller pitched six scoreless innings in a 5-4 Kansas City victory on Aug. 12. So far in 2020, Keller has not allowed an earned run (11 innings pitched in two starts). He's walked five and struck out 10.

In the second game, Bauer, the former Cleveland Indians right hander, will face the Royals for the 18th time (17 starts) in his career. He's 5-5 all-time with a 3.69 ERA against Kansas City. He's faced the Royals 10 times in Kauffman Stadium, the second-most appearances for any road park. He's 4-2 with a 3.52 ERA in the home of the Royals.

In his last appearance at Kauffman Stadium -- and his last appearance with the Indians before being traded to the Reds prior to the trade deadline last season -- Bauer was frustrated after giving up eight runs (seven earned) in 4 1/3 innings. As Cleveland manager Terry Francona approached the mound, Bauer turned and threw the ball over the center-field wall.

"I don't remember much positive from the last time I was here," Bauer said Tuesday. "The last memory I have of Kauffman is apologizing to my teammates and getting screamed at. We're going to try to avoid that tomorrow and consider it a win if I'm able to do that."

The Royals, meanwhile, will counter with Matt Harvey, who pitched Game 1 of the 2015 World Series in Kauffman Stadium while he was with the Mets. He faced the Royals twice in that World Series, taking a no-decision in each game.

He signed a minor league contract with the Royals in late-July and will be activated prior to Wednesday's game. He's thankful for the opportunity, fully aware of the irony.

"A lot of emotions and excitement," Harvey said of the opportunity to pitch in the majors again. "Obviously I have a little bit of history here. There were probably a little more fans at that game than there will be (Wednesday) night.

Harvey has never lost to the Reds, posting a 4-0 career record with a 2.63 ERA in six starts. The four wins are the most against any opponent without a loss.

Kansas City manager Mike Matheny is just happy to have him fill a spot in the rotation.

"You have a guy who's been through this before," he said. "He knows what it should feel like. I'm happy to have him and excited to get him on the mound."