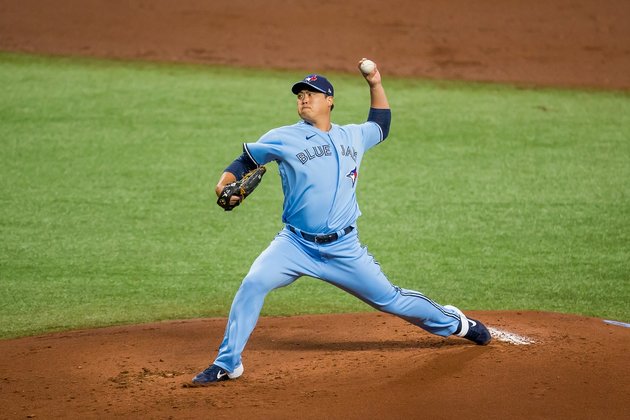 The Toronto Blue Jays are scheduled to send out their ace, left-hander Hyun-Jin Ryu, Thursday night against the visiting Boston Red Sox in the rubber match of a three-game series at Buffalo.

The Blue Jays defeated the Red Sox 9-1 on Wednesday as the teams have split the first two games of the series.

After the game, however, the discussion was about the Jacob Blake shooting and the postponement of all NBA playoff games Wednesday and three major league baseball games as part of a protest.

Blue Jays first baseman Rowdy Tellez, who had two home runs and four RBIs Wednesday, said there had been no chance to discuss the situation before the game but the team will have a meeting to discuss it on Thursday.

"We're going to talk to the players and discuss it and see where it goes," Blue Jays manager Charlie Montoyo said.

Red Sox center fielder Jackie Bradley Jr, said there was no discussion among Red Sox players about whether to play Wednesday, but said he is in "full support" of those teams and players who did not play.

This will be Ryu's first start against the Red Sox as a Blue Jay. He made two starts against Boston when he was with the Los Angeles Dodgers and was 0-1 with a 3.00 ERA. His most recent outing against Boston was last season when he allowed seven hits and two unearned runs in seven innings.

Mazza will be making his third appearance and second start of the season for Boston. He has never faced the Blue Jays.

Toronto's Cavan Biggio was 1-for-5 Wednesday and has reached base safely in 19 straight games. With two doubles and three RBIs Vladimir Guerrero Jr. has a nine-game hit streak.

The struggling Red Sox will likely be sellers before the trading deadline on Monday and that it could be time to start looking to the future and playing prospects more than veterans.

"It's certainly possible that will happen," Red Sox manager Ron Roenicke said. "I've been with organizations before where it's happened. I think you get to a point where it's really important to look at next year, wherever that point may be. We're obviously not in a real good spot right now. ... Next year is important and years after that are important. If you're not able to find out some things in a down year then you're not accomplishing anything."

Reid-Foley pitched a perfect ninth inning in the game Wednesday.

The Red Sox won two of three from the Blue Jays in a series at Boston Aug. 7-9.