Boston's Bradley unsure of future beyond finale in Atlanta 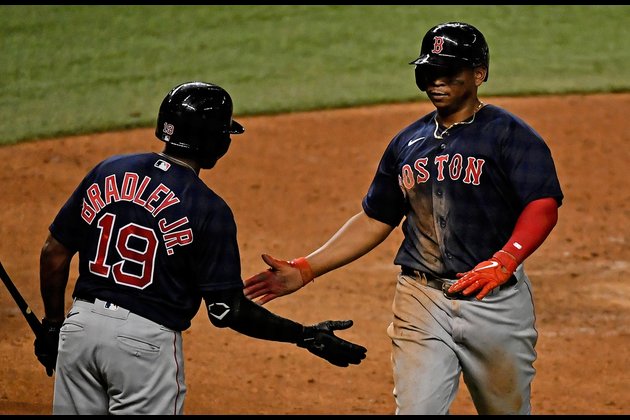 Jackie Bradley Jr. has known only one big league uniform, and he may be wearing it for the last time when the Boston Red Sox close the season against the host Atlanta Braves on Sunday.

Bradley is eligible for free agency after the season, and there have been no substantial discussions about a return.

The 30-year-old Bradley said playing in this season's home finale at Fenway Park on Thursday was highly emotional.

He tried to relish the moment but at the same time, there was no way to avoid thinking that it could be his final time patrolling the outfield as a member of the Red Sox.

"I had some great times, too. Great moments. And that's things that I will never forget," said Bradley, who first reached the majors with Boston in 2013. "And yeah, I got to the field a lot earlier, and I just spent some time thinking about all the things that we've accomplished as a team, as an organization, and it was cool. I felt at peace, I felt at ease."

Bradley was MVP of the American League Championship Series in 2018 when the Red Sox eliminated the Houston Astros and then went on to defeat the Los Angeles Dodgers in the World Series. He had three homers in the postseason, two against Houston and one against the Dodgers.

Bradley was 0-for-2 with three walks and a run scored as the Red Sox (23-36) routed the Braves 8-2 on Saturday to even the three-game series at one win apiece.

Christian Vazquez hit his second career grand slam and Bobby Dalbec hit a two-run shot as Boston scored all eight of its runs in the second inning.

Dansby Swanson homered for Atlanta (35-24), which lost for the just second time in the past seven games.

Freddie Freeman is expected to be in the lineup. Freeman, one of the leading National League MVP candidates, is also making a run at the batting title. He enters the final day with a .343 average, just behind Washington's Juan Soto (.346).

Braves third baseman Austin Riley was held out Saturday and will also miss Sunday's game due to a sore right quadriceps.

"We are going to give him four days of treatment," Atlanta manager Brian Snitker said of Riley. "Hopefully, he may be able to get some live at-bats (in batting practice) and not just take any chances. He is out walking around. We are just going to get him treated. He can hit and do all that. We want to try to keep him away from the quick movements and running."

Right-hander Nick Pivetta will make his second appearance for the Red Sox. He was sharp in his team debut as he struck out eight and allowed one run and four hits over five innings while beating the Baltimore Orioles on Tuesday.

Pivetta (1-0, 9.28 ERA) allowed 10 runs in 5 2/3 innings in three appearances for the Philadelphia Phillies earlier this season.

Right-hander Bryse Wilson (1-0, 4.26) will make his second start and sixth appearance of the season for Atlanta. The 22-year-old tossed five shutout innings, allowing three hits, in his first start while beating the Miami Marlins on Tuesday.

Wilson made a relief appearance against the Red Sox on Sept. 3, 2018, and it didn't go well. He gave up three runs, two hits and three walks in one inning.