No. 11 Miami ready for unexpected from Virginia 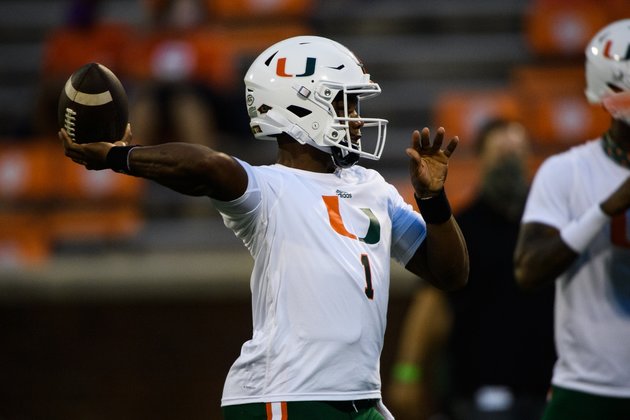 Even though Virginia has dropped three straight games by 17-plus points and played four different quarterbacks this month, the struggling Cavaliers have No. 11 Miami's full attention.

"We tell our players every week that it is hard to win a football game," Diaz told WQAM 560 on Monday. "You have to respect the process. We have to understand that what we have accomplished is irrelevant because here comes Virginia and we have to get ready for those guys.

"College football operates in a different world every week. It's easy to say, 'Well this team did that to that team, and that team did that, so that means this will happen.' It's just not the way it happens -- not with 18- to 22-year-olds."

The Hurricanes rebounded from their Oct. 10 loss at No. 1 Clemson with a 31-19 victory at home last Saturday against Pittsburgh.

D'Eriq King tossed a season-high four touchdown passes, two of them to backup tight end Will Mallory, as Miami led wire-to-wire in a solid but hardly spectacular performance. King tossed two interceptions and was sacked four times and the Hurricanes averaged just 2.6 yards per rush attempt, punted six times and failed on nine of their 13 third-down chances.

Playing without starting quarterback Brennan Armstrong, Virginia repeated a season-long pattern by falling into a 14-0 hole less than four minutes into the game. The Cavs have been outscored 48-3 in the first quarter this season.

"I don't know what it is, honestly," linebacker Charles Snowden said. "I don't think guys are going out with the wrong mindset. If I knew that answer, we wouldn't be getting off to the slow starts."

UVA battled back for a 20-20 halftime tie and trailed by three entering the fourth quarter, but then gave up a 75-yard touchdown run, muffed a kickoff return and tossed an interception during a disastrous and decisive five-minute stretch. The Cavaliers have committed 12 turnovers through four games.

"We haven't played to the standard which we normally would like to play at," said Snowden, a senior and team captain. "And it's all within our control. It's not really like, 'Woe is me.' It's like, 'All right, get your hard hat, let's get ready to work and get back to playing Virginia football.' "

The Cavaliers could be shorthanded in the secondary Saturday. Starting safeties Joey Blount and Brenton Nelson and corner De'Vante Cross all left the Wake Forest game with injuries and coach Bronco Mendenhall did not give an update on their availability.