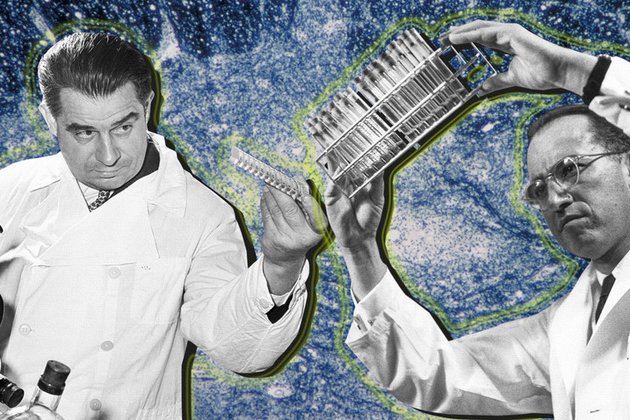 "Epidemics have a way of spontaneously running out of steam," veteran novelist Philip Roth wisely remarked in his last novel 'Nemesis', set during a polio epidemic in the United States. In the middle of the last century, polio was the number one killer of children across the globe. It was an incurable disease, until a vaccine was finally co-developed by the United States and USSR.

Poliomyelitis (polio) is actually as old as the hills. An Egyptian stone engraving dating from around 1403-1365 BC captures a crippled young priest with severe foot deformities indicative of polio. Human populations experienced the disease at various epochs. It wasn't until 1908 that Austrian physicians Karl Landsteiner and Erwin Popper came to the conclusion that polio was in fact a viral infection. It's also believed that industrial and social revolutions heavily contributed to the spread of polio.

In the late 1940s, polio outbreaks in the United States disabled an average of 35,000 people per year, according to the Centers for Disease Control and Prevention (CDC). In 1952, the U.S. already saw a whopping 57,628 cases. More and more children of different ages succumbed to the communicable disease, which causes spinal and respiratory paralysis.

"And finally, the cataclysm began - the monstrous headache, the enfeebling exhaustion, the severe nausea, the raging fever, the unbearable muscle ache, followed in another forty-eight hours by paralysis," Roth described in his pretty realistic novel. 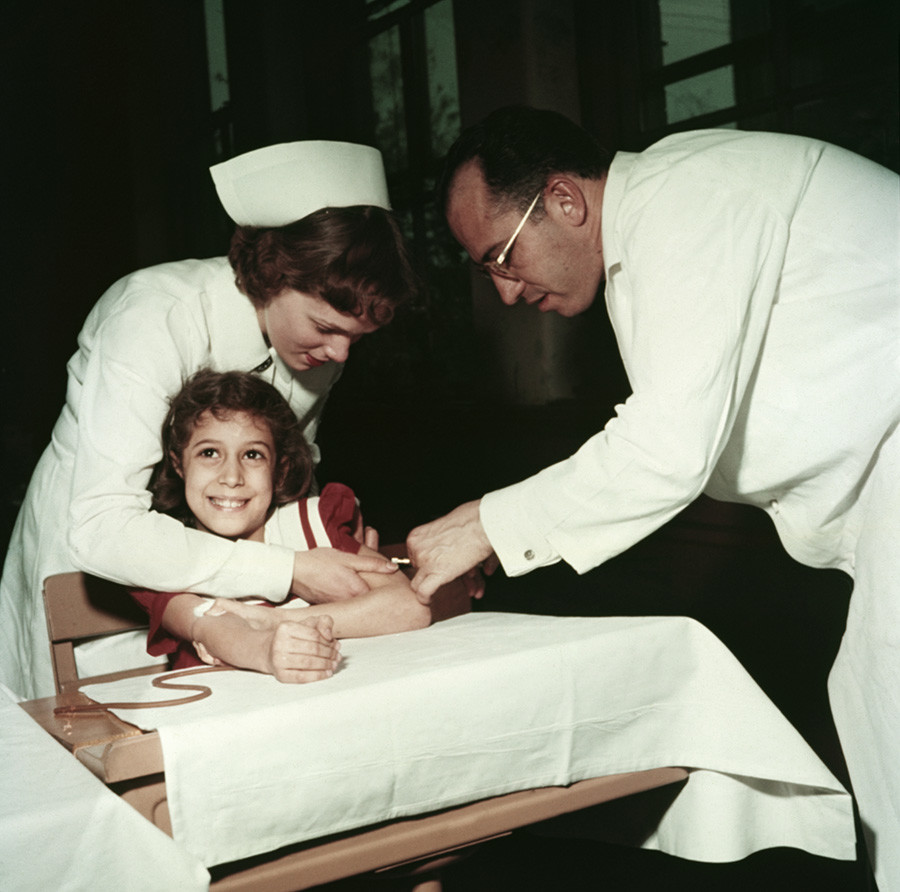 Dr. Jonas E. Salk and a nurse administer a polio vaccine to Pauline Antloger at Sunnyside school in Pittsburgh, Pennsylvania.

It was not the first outbreak of polio in the United States, though. In 1916, New York was hit hard by the disease for the first time. Over 2,000 people died in the Big Apple alone, mostly children. Nationwide, the death toll reached at least 6,000, with thousands more destined to be paralyzed for life. In 1921, the future president of the United States, Franklin D. Roosevelt, was diagnosed with infantile paralysis, or poliomyelitis.

The panic and fear kept rising among both adults and children. A polio epidemic kept intensifying in the summer heat, leading to closures of pools, parks and other public places frequented by children.

The then incurable disease sentenced its victims to a lifetime on crutches or wheelchairs. Not much was known about polio, other than that it's a highly infectious illness that spreads through contact between people, from person to person.

In the 1950s, polio became a global health threat, looming large in the United States and USSR, spreading like wildfire across Europe, Asia and Africa. 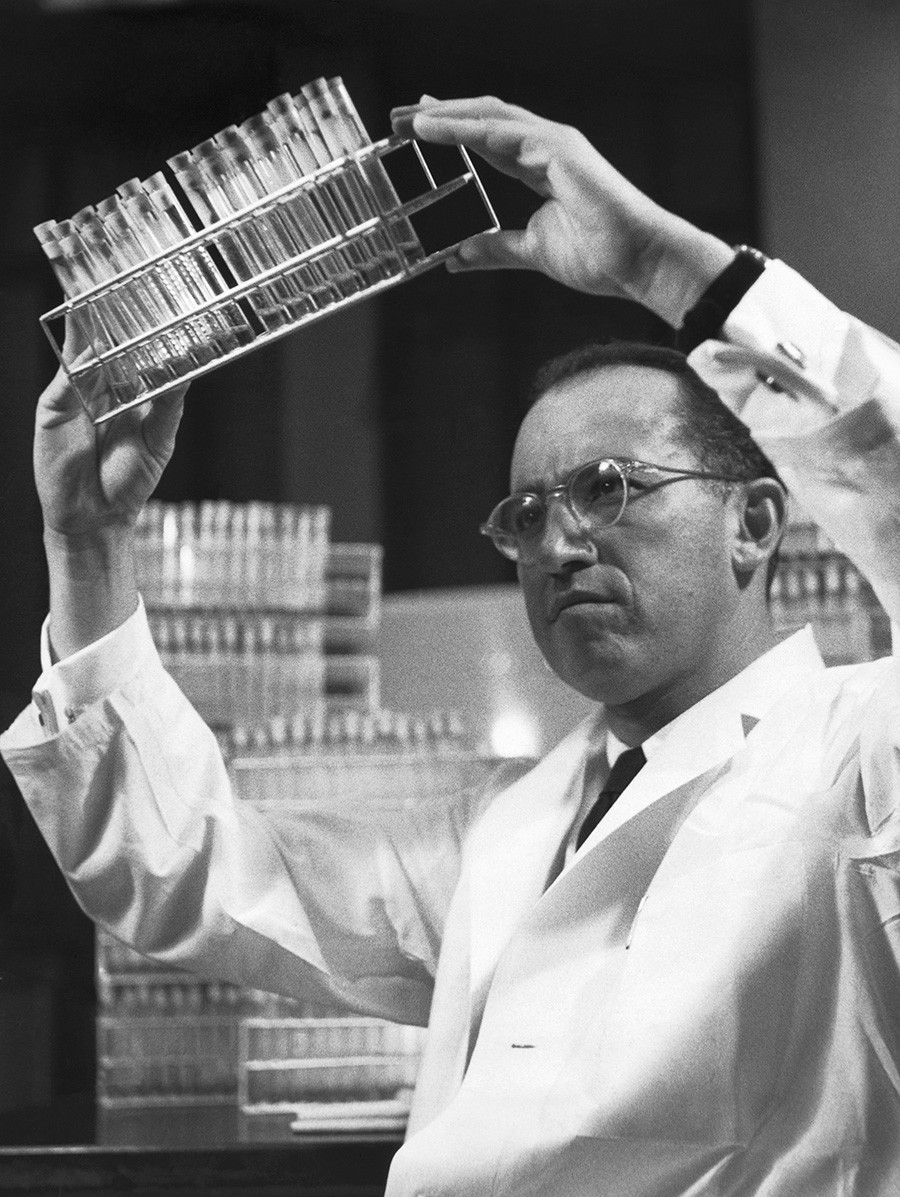 To stay on the safe side, Dr. Salk first inoculated several volunteers, including his family, three children and himself.

In the early 1950s, the first polio vaccine was developed by pioneering American physician Jonas Salk (whose mother had immigrated to the United States from Russia). This vaccine contained the "killed" polio virus and retained the ability to immunize patients without the risk of infecting them. The vaccine was given by injection. To stay on the safe side, Salk first inoculated several volunteers, including his family, three children and himself. Everything was fine and everyone began producing antibodies to the disease. In 1953, the poliovirus that caused the disease was for the first time ever seen through an electron microscope. In 1954, testing on one million "polio pioneers" began, involving kids aged between six to nine. The following year, the vaccine was found to be safe and effective for human application. Things went terribly wrong in 1955, when as many as 200,000 children received the Salk polio vaccine, manufactured by California-based Cutter Laboratories, containing a non-inactivated, live virus. This triggered some 40,000 cases of polio, with 200 children left paralyzed and 10 dead.

Polio vaccinations resumed shortly after the tragedy, which became known as the Cutter Incident. According to CDC, the fatal incident led to the creation of a "better system of regulating vaccines".

And yet, while the average number of polio cases in the U.S. stood at 45,000 before Salk's vaccine was introduced, by the early 1960s, that number had nosedived to only 900. Salk, who never patented his vaccine, was not the only scientist to make a breakthrough in the studies of polio eradication. 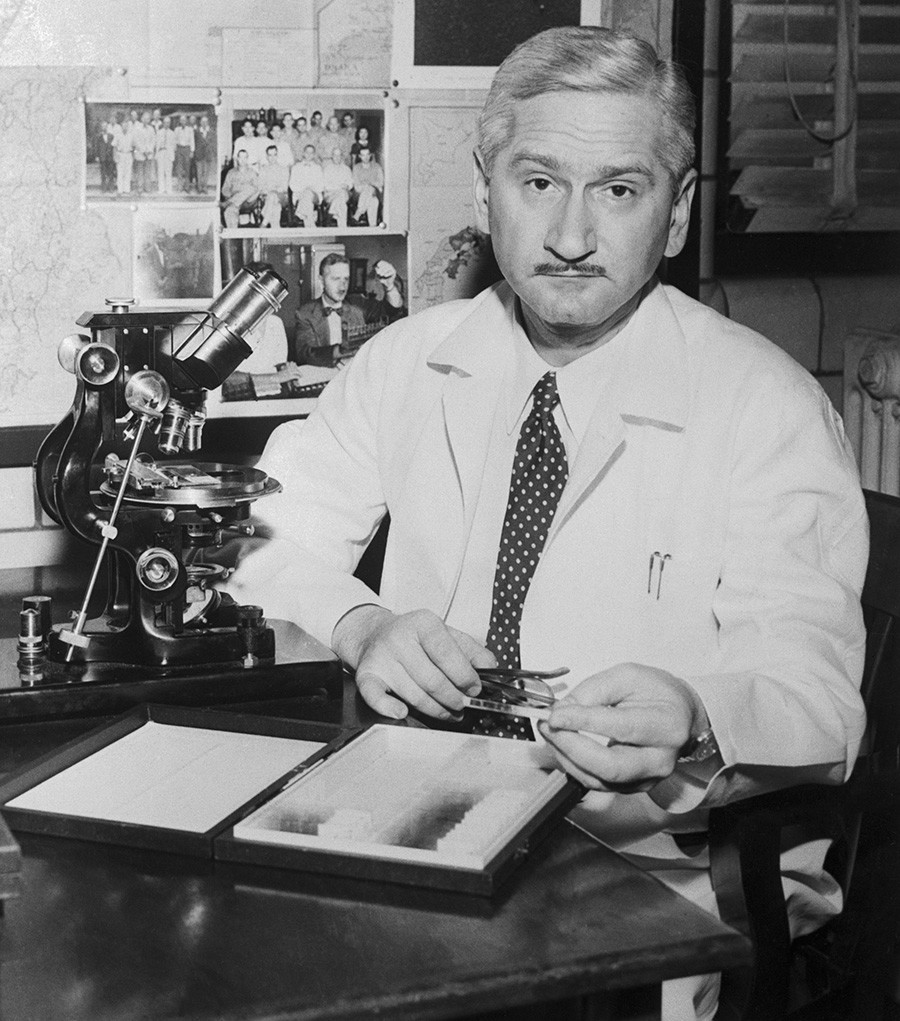 Dr. Albert Sabin made his vaccine from "live" polio virus.

Sabin, who was born in Bialystok (then part of the Russian Empire) and emigrated to the United States with his Polish-Jewish parents in 1921, took a different approach. He made his vaccine from "live" polio virus. Its main advantage was that it could be administered orally. The foremost scientist managed to sequester a mutant form of the polio virus incapable of producing the disease and therefore safe for introduction to the human body. This avirulent virus did wonders, reproducing rapidly in the intestines, forcing out lethal forms of the polio virus and providing the sought-after protection from the disease. Sabin's polio vaccine was chosen for mass immunization because of its ease of administration and low costs. On top of it, the Sabin vaccine possessed an ability to break the chain of transmission. It was first tested outside the USA in the late 1950s. 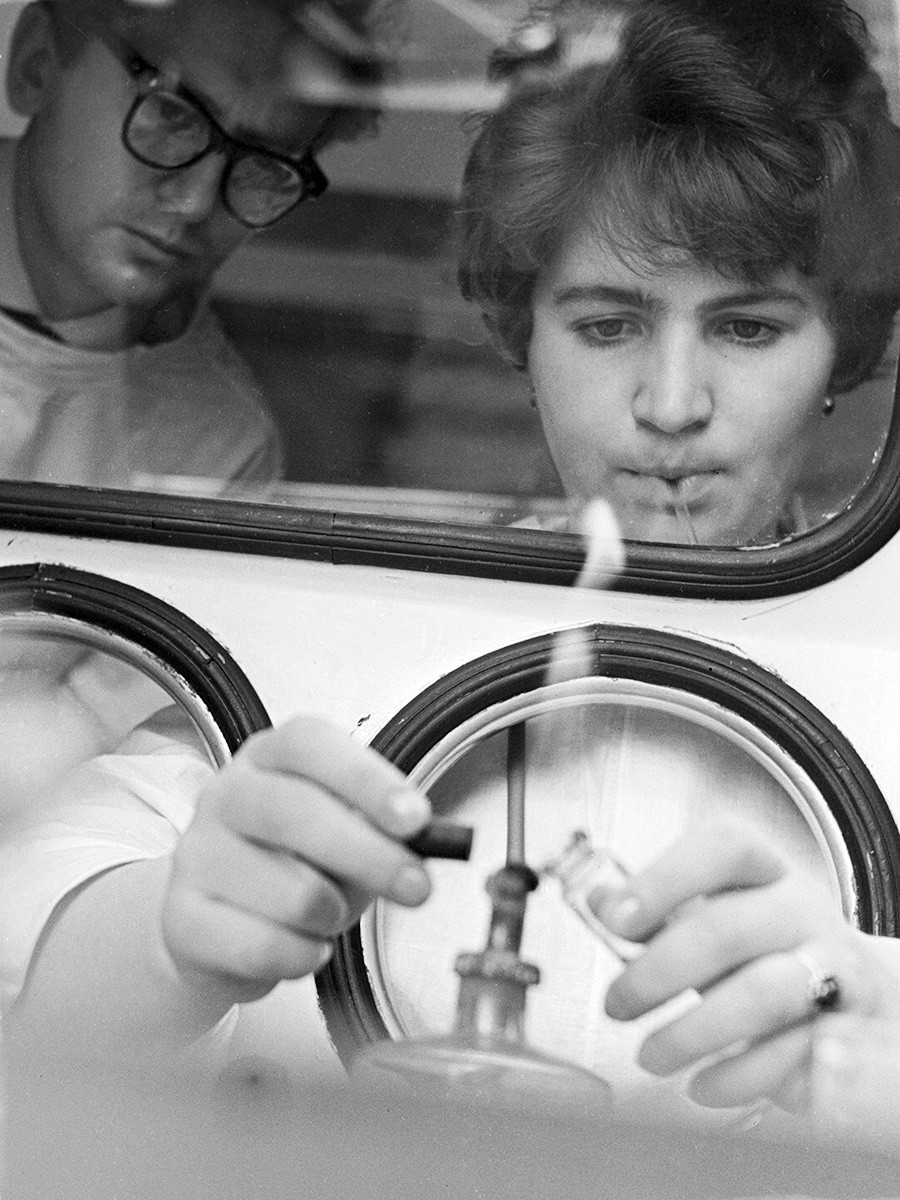 To counter the threat, the Poliomyelitis Research Institute was launched in the USSR.

The first outbreaks of polio in the Soviet Union occurred in 1949, in the Baltic states (Latvian, Estonian and Lithuanian SSR), in Kazakh SSR and in Siberia. In the mid-1950s, between 10 to 13 thousand cases of the infection were registered in the country. By 1958, the incidence of poliomyelitis in the USSR had reached 10.66 cases per 100 thousand population (in other words, 22,000 people were infected with polio). It means, the number of polio cases in the United States was about three times higher.

READ MORE: 10 archive PHOTOS of vaccinations in Russia and the USSR

To counter the threat, the Poliomyelitis Research Institute was launched in the country, with leading Soviet microbiologist Mikhail Chumakov (who rose to hero status as a scientist who had isolated the virus that causes tick-borne encephalitis) becoming its founder. 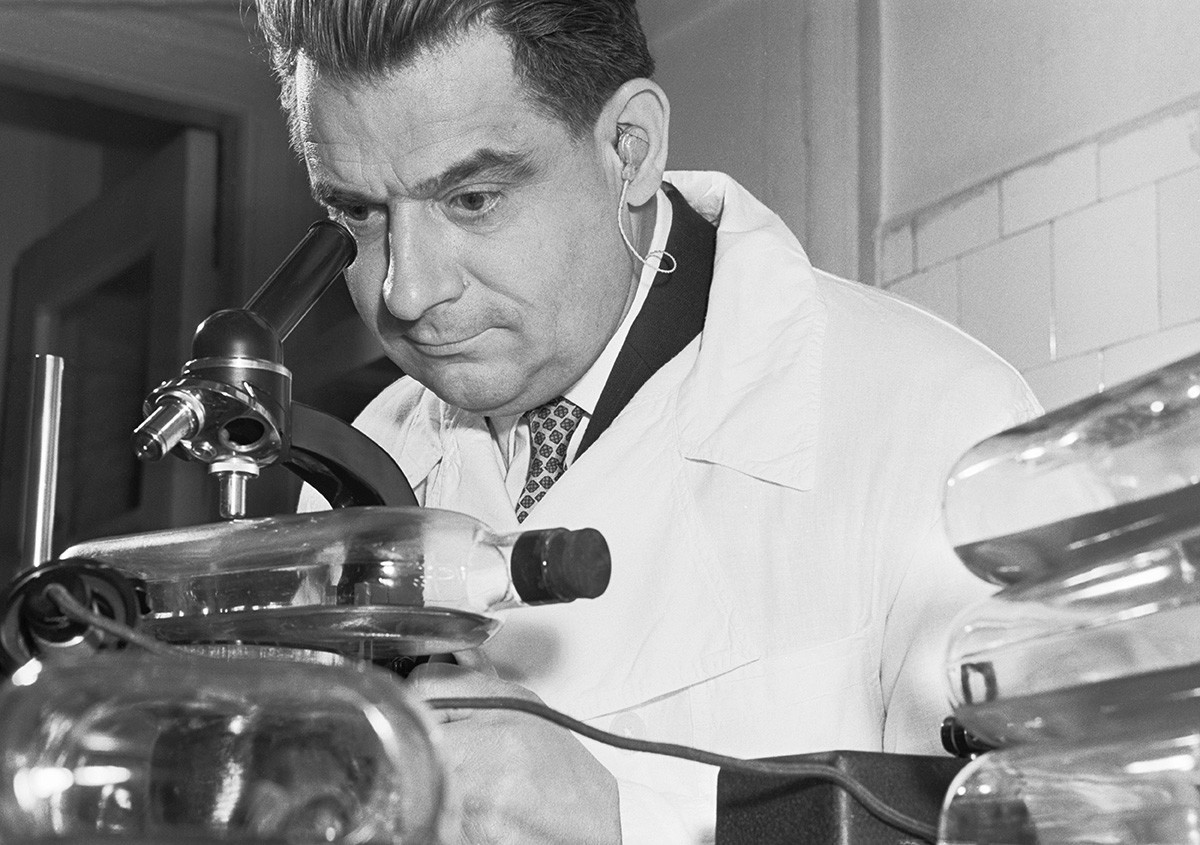 Mikhail Chumakov rose to hero status as a scientist who had isolated the virus that causes tick-borne encephalitis.

In the January of 1956, Soviet newspapers formally announced that Chumakov, his scientist wife Marina Voroshilova and a microbiologist from Leningrad (now St. Petersburg) named Anatoly Smorodintsev were on a visit to the United States "to familiarize themselves with the methods of treating polio and Dr. Salk's vaccine preparation". 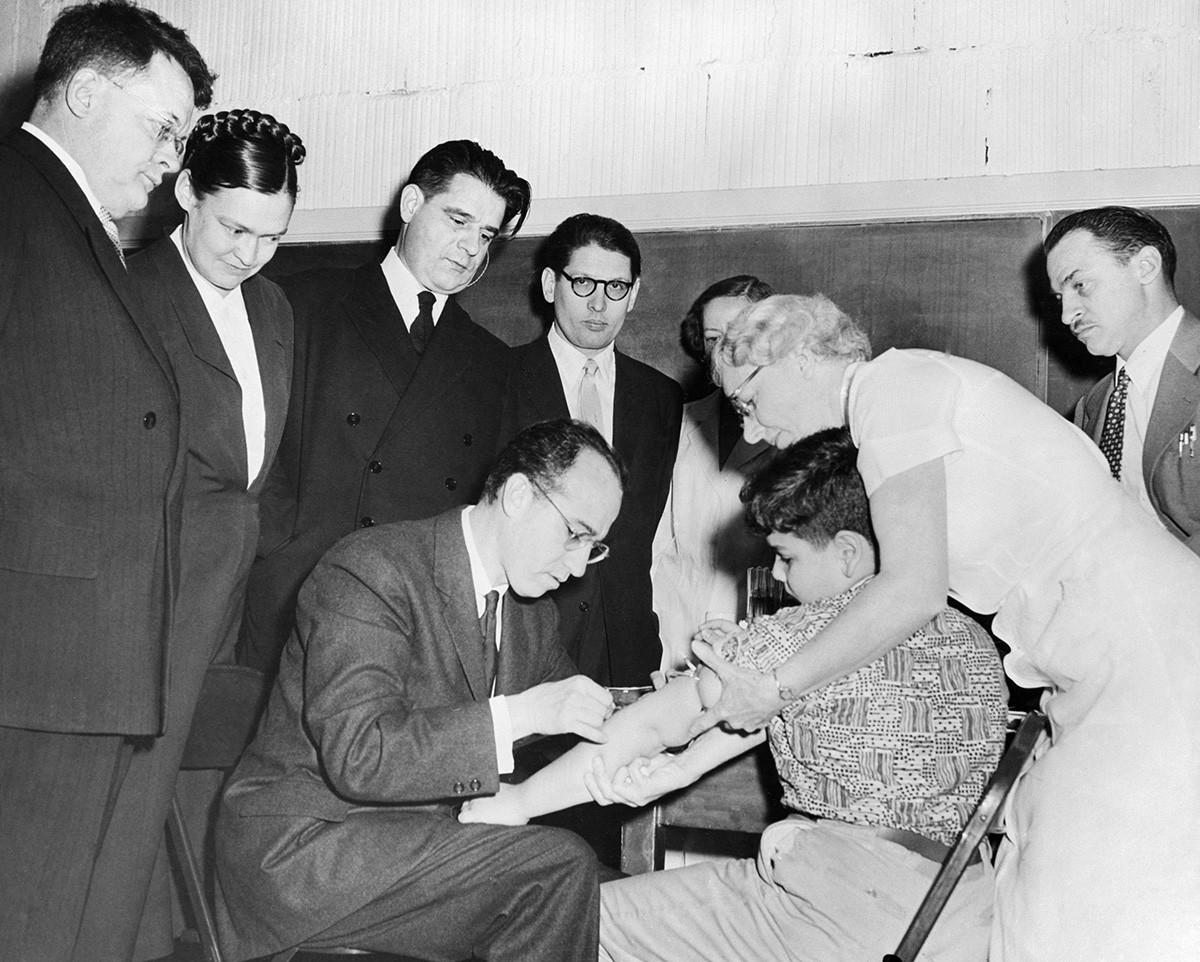 Soviet scientists arrived in the United States to study Salk's vaccine, but it so happened that Chumakov also caught up with Albert Sabin. Poor knowledge of Russian and English didn't prevent the two groundbreaking scientists from finding a common language. Chumakov invited Sabin to the USSR (Salk had also received an invitation, but refused to come).

Sabin visited Moscow and Leningrad in the summer of 1956. Upon his return, he applied to the U.S. State Department for permission to send the attenuated strains of the polio virus to the USSR. Despite fears that Moscow would use them to create biological weapons, a permit was nonetheless issued. After receiving the strains, Soviet researchers created the first vaccines based on them and launched trials. First on themselves, later, as always, on family members. The first kid to receive the vaccine in the USSR was Anatoly Smorodintsev's five-year-old granddaughter.

In 1956, the production of an inactivated Salk's polio vaccine was, meanwhile, mastered at the Poliomyelitis Research Institute run by Chumakov. 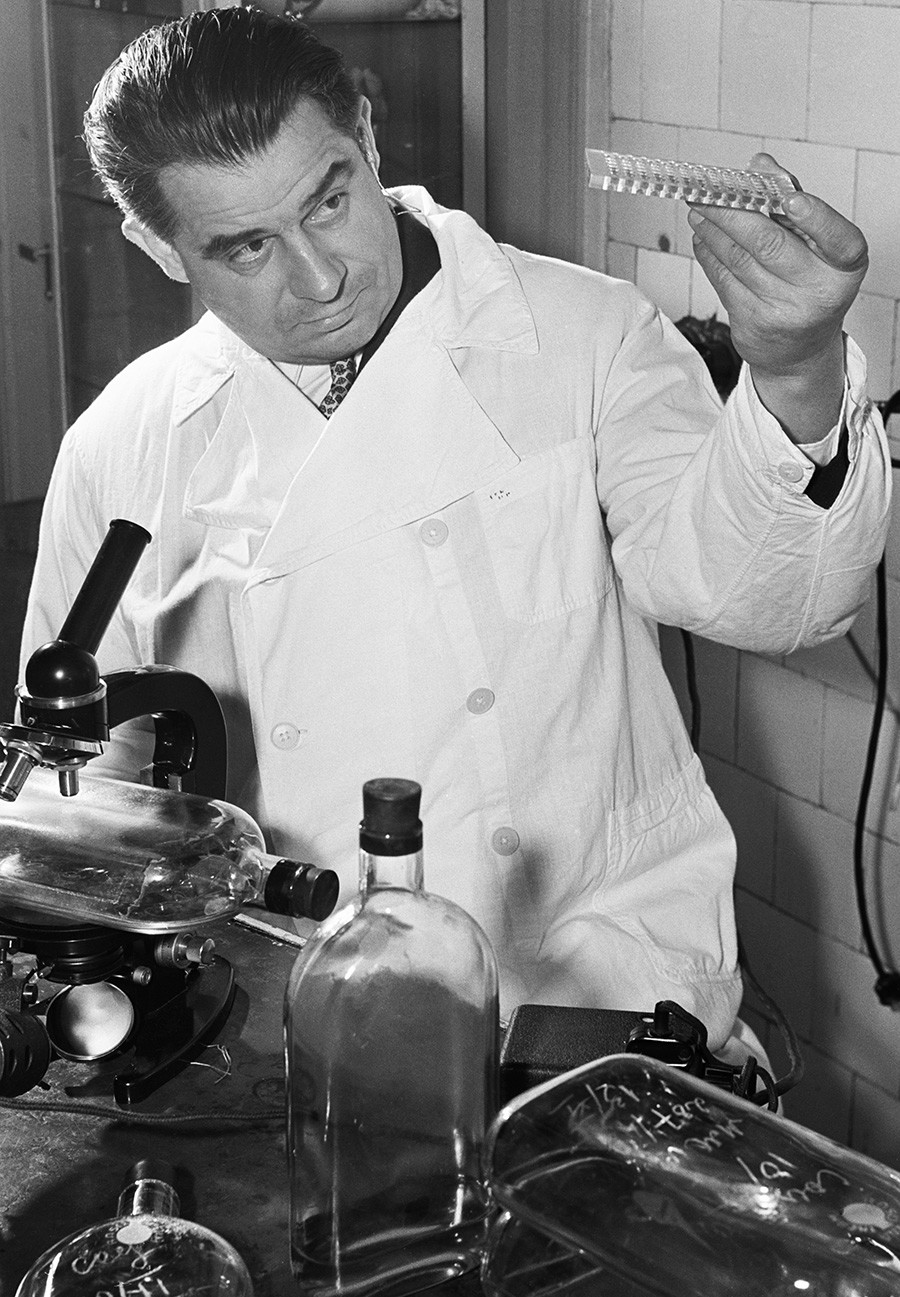 Mikhail Chumakov came up with the idea of ​​making the vaccine in the form of candy pills.

"My parents managed to persuade Sabin to pass them the strains, in order to make a live vaccine in the USSR. I think my mother was the initiator of this project. Everything happened without formalities, my parents brought the strains literally 'in their pockets' and the Poliomyelitis Research Institute quickly produced a live vaccine in the USSR. The problem was with the trials: everyone was afraid that 'live' viruses would be more dangerous than the 'killed' ones. Smorodintsev, on the contrary, had proved that such viruses were totally safe," Mikhail Chumakov's son Konstantin later recalled.

Soviet health officials (like their U.S. counterparts) had serious doubts whether the "live" vaccine was really harmless.

According to Chumakov Jr., who also followed in his father's footsteps and also became a microbiologist, his father was able to obtain permission for the trials only after he personally made a phone call to First Deputy Chairman of the Council of Ministers of the Soviet Union, Anastas Mikoyan.

"Mikoyan had many grandchildren and was deeply worried about the polio epidemic. My father convinced him of the need for trials, saying that he was taking full responsibility for their outcome. The first trials were carried out in Estonia [Estonian SSR], where the incidence of polio was high. The result was excellent, with the number of new cases dropping sharply. The trials continued in other regions of the country. Later, the mass vaccination campaign began and the horrible infection was practically eliminated in the whole country," Konstantin Chumakov said.

Mikhail Chumakov came up with the idea of ​​making the vaccine in the form of candy pills - no injections were needed to administer it. 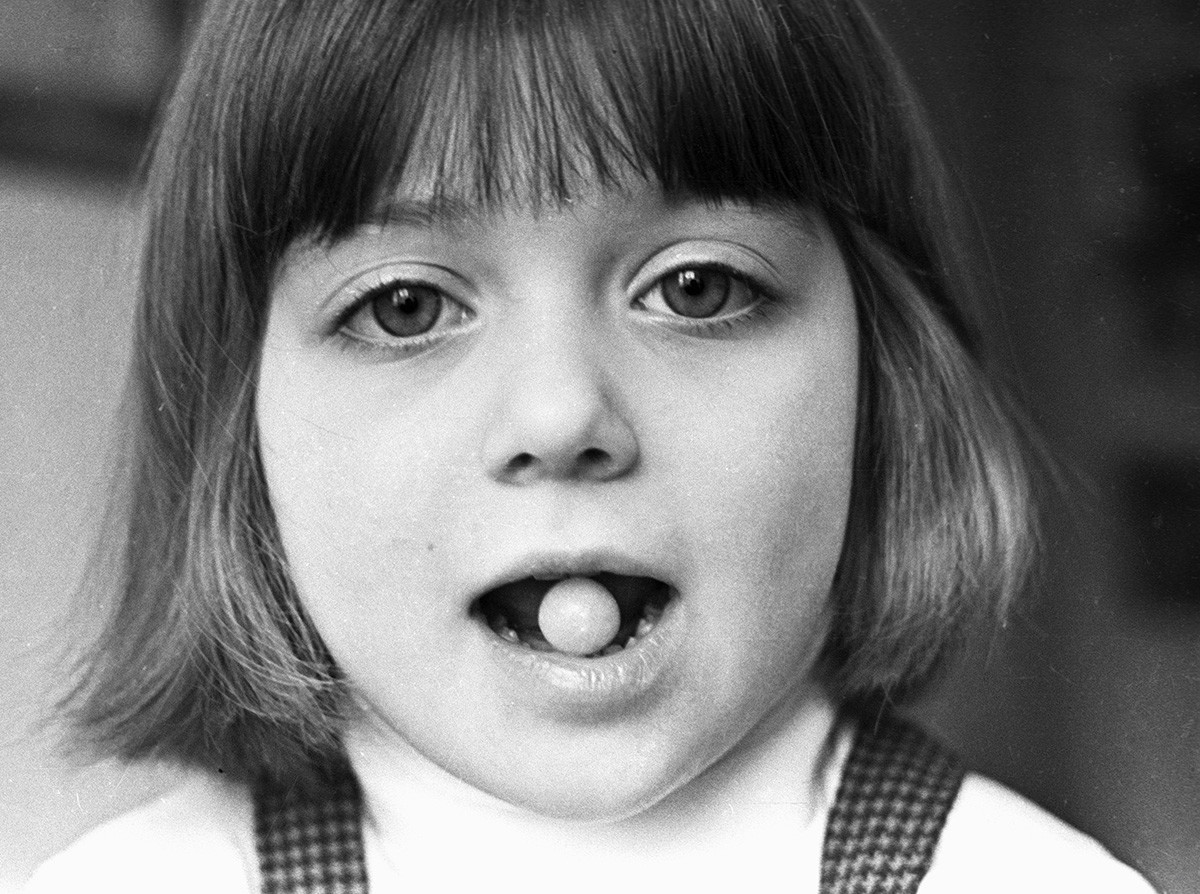 A girl holding a vaccine capsule in her teeth at the Institute of Poliomyelitis and Encephalitic Infections.

Production of the candy-coated polio vaccine was soon launched in Moscow. By the end of 1960, the entire population under the age of 20 was vaccinated in the USSR - 77 million people.

READ MORE: How the FIRST vaccination in Russia happened 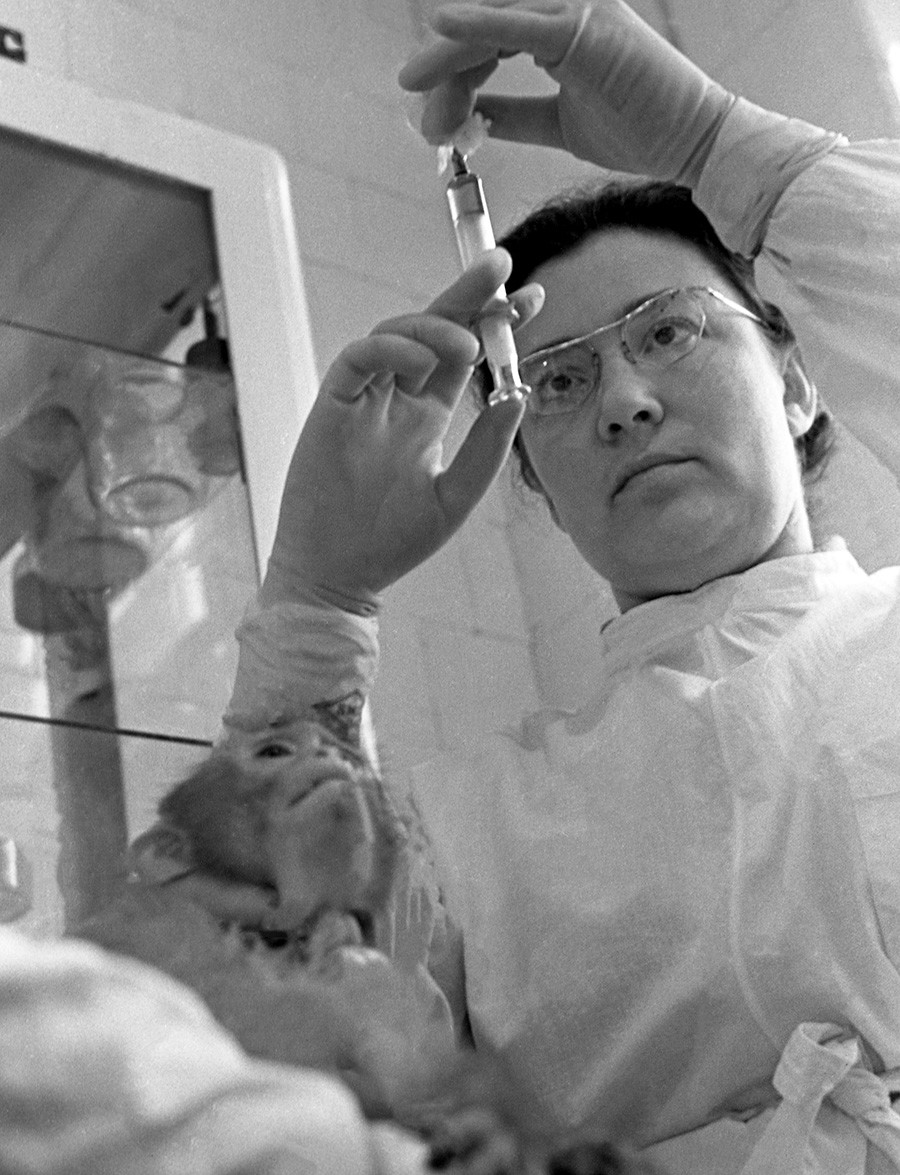 By the end of 1960, the entire population under the age of 20 was vaccinated in the USSR.

In subsequent years, the incidence of poliomyelitis continued to drop and was only sporadic. In the 1970s, between 18 to 69 cases of poliomyelitis were registered, with the USSR eventually declared polio-free.