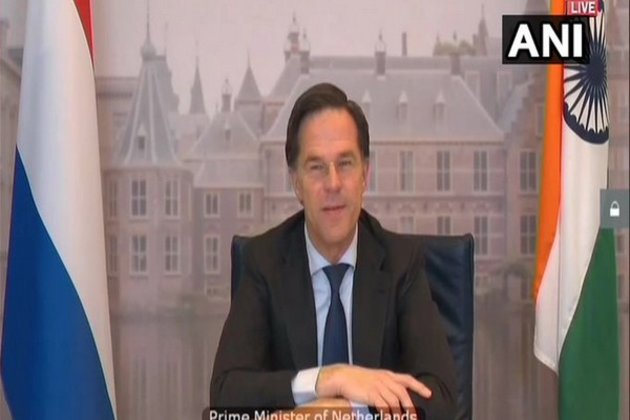 New Delhi [India], April 9 (ANI): During a virtual summit with Prime Minister Narendra Modi on Friday, Netherlands Prime Minister Mark Rutte applauded India's Vaccine Maitri programme and said that India is a crucial partner both in the Indo-Pacific region and in the world at large.

"For EU, like the Netherlands, India is a crucial partner both in the region and in the world at large. Take for example United Nations. The Netherlands welcomes India's commitment to COVAX as an essential partner in terms of accessing vaccine for low and middle-income countries. And we applaud India for its Vaccine Maitri programme," Rutte said at the virtual summit with Prime Minister Modi.

Supporting India's bid for a permanent seat at the UN Security Council, Netherlands PM said, "You and I, we both support UN reform, which includes making the UN Security Council more representative. In our view, India is an obvious candidate for a permanent seat on an expanded council. In G-20 as well, India plays a crucial role."Noting the important economic ties between the two countries, Rutte stated that, "...our ties go far beyond the economic matter alone. First, it's worth noting that the Netherlands has the largest Indian community on the European continent and we house more than University students. We are proud of their achievements and their contributions.""We both believe in democracy and the rule of law, in strong institutions and multilateral cooperation and open and fair world trade. At a time these values are under increasing pressure. It's important to form and protect global coalitions," he added.

Recalling his previous visit to India, the Netherlands PM said, "My previous visits to India in 2015, 2018 made a big impression on me. Your country's energy, creativity, and hospitality is truly without equal."He further thanked Prime Minister Modi for his continued support on the trade front during the pandemic.

"Your support helped support the continuation of trade between our countries even in those difficult times. We even appreciated the air bubble which was an agreement between our two countries and this enabled our national carrier to bring many Dutch and EU citizen back to Europe and return Indian citizen to India including many coming from Latin America," he said. (ANI)