Plenty of competition with 18 to go at U.S. Open 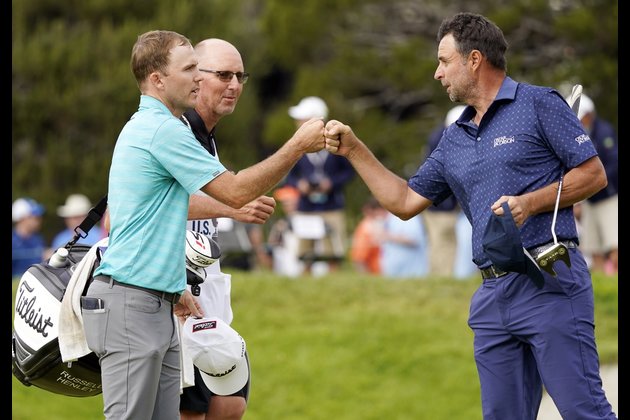 Three golfers have the upper hand heading to the final round of the U.S. Open on Sunday.

But it's difficult to overlook several others who are within striking distance at Torrey Pines in San Diego.

Russell Henley, South African Louis Oosthuizen and Canadian Mackenzie Hughes are probably considered underdogs even though they're all at 5-under-par 208 and two shots clear of the rest of the field.

It's the rest of the field who are getting the bulk of the attention.

There sit defending champion Bryson DeChambeau and Irishman Rory McIlroy, a four-time major winner, at 3 under.

When McIlroy won the 2011 U.S. Open, he entered the final round ahead by eight shots. That ended up being his margin of victory.

"If I'm going to get another U.S. Open trophy, I'm going to have to fight for it a little bit more than I did back 10 years ago," McIlroy said, who has never won a major when trailing after three rounds.

McIlroy is trying to become the first non-U.S. golfer to win both the PGA Championship and U.S. Open multiple times.

DeChambeau had his first bogey-free round in a major Saturday. Afterward, he said there has been notable progress.

"I feel like I'm starting to understand major championship golf and how to play it and how to go about managing my game, my attitude and just my patience level," he said.

World No. 1 golfer Dustin Johnson is at 1 under, joined by 2020 PGA Championship winner Collin Morikawa.

Any golfer holding an under-par score probably envisions a path to the title.

"If I can go out and shoot a good score tomorrow, probably going to have a chance," Johnson said.

Oosthuizen has a solid background in majors, winning the 2010 British Open. He has been a runner-up five times in majors, including sharing second place in last month's PGA Championship.

Oosthuizen figures there are plenty of golfers in range. His goal is slight improvement from the most-recent major.

"Try and go one better," he said. "Just keep patience and calm and see if you can get yourself within striking range with nine holes to go on Sunday and then take it from there."

FanDuel sportsbook listed Oosthuizen (plus-700) as the third-best pick to win the tournament entering the weekend, behind Jon Rahm (plus-380) and Xander Schaueffele (plus-600). DeChambeau was sixth at plus-1800.

"I feel like it's to my advantage because I've played good golf here in the past. I've had some good Sundays out here, and I'm confident about (the last round)," he said.

Oosthuizen and Hughes will be in the final pairing. They will follow Henley and McIlroy off the first tee.

"I'm just excited for the opportunity to have a chance and be in one of the final groups," McIlroy said.

Oosthuizen said he's not sure how his experience will factor in coming down the stretch.

"It will help a bit, but I need to play well," he said. "There's a lot of great players up there that's got a chance of winning this."

Hughes, 30, has won just once on the PGA Tour. In eight previous majors, he missed the cut six times. His tie for 40th in this year's Masters is his best finish.

Henley, 32, played college golf for Georgia. He last won on the PGA Tour in the 2017 Houston Open.

"I don't know how many more good years I have of golf left, but hopefully a lot, but I'm just excited," Henley said. "You always wonder what it would feel like or be like to be in contention (in a major). I'm excited."

A major championship comes with a different vibe.

"I feel good about my game," Henley said. "I've never been in this position before in a major. Just feel like I'm going to learn something no matter what happens."

The third-to-last pairing is DeChambeau and Scottie Scheffler, with Matthew Wolff and Rahm in front of them. Morikawa and Johnson have the slot before Wolff and Rahm.