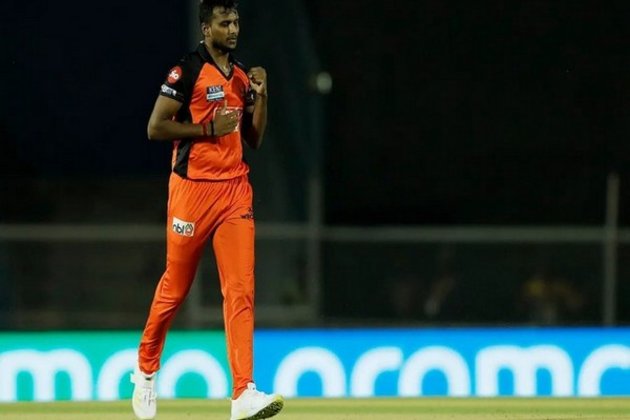 Natarajan is troubling the batters with toe crushing yorkers and tidy bowling in the death overs in the IPL.

The left-arm SRH pacer seems to have found his rhythm in the most exciting IPL season and Gavaskar is pleased to see him improving his craft.

Speaking on 'Cricket Live' on Star Sports, Gavaskar said: "He's always been a yorker specialist but what we've seen in recent times is the way he's managing to move the ball late which deceives the batsmen. So, it's good to see that improvement in Natarajan."The legendary cricketer also opined that Natarajan could be a valuable addition to India's pace attack in the T20s due to his ability to bowl with discipline in the death overs.

"It's good to see him do well because for some time it seemed as if India had lost him. It's good to have him back in contention because he bowls very well, particularly in between 16th and 20th over. He'll be very much in contention (for Team India) for his ability to bowl well in the death overs," he added.

Gavaskar also believes that the Tamil Nadu pacer has put the disappointments of the previous season behind and he's presenting a case for himself for the T20 World Cup in Australia.

The former cricketer said, "I think it's a matter of confidence. Last year, perhaps, he wasn't on top of his game because of the injury situation. Right now he's full of confidence, he's had a bit of a break, and he's fresh and raring to go. He recognises that there is a T20 World Cup in four months' time and he wants to be on that flight to Australia."SRH will clash with four-time champions CSK on Sunday evening. To cap off an electric weekend, two reckoning forces will collide with each other as Chennai seeks their third win of the season which has seen too much chaos already while the Sunrisers are desperate to put their campaign back on track.

CSK will have MS Dhoni back at the helm after Ravindra Jadeja relinquished his captaincy responsibilities. (ANI)