Study finds rise in pesticides in European fruit and vegetables 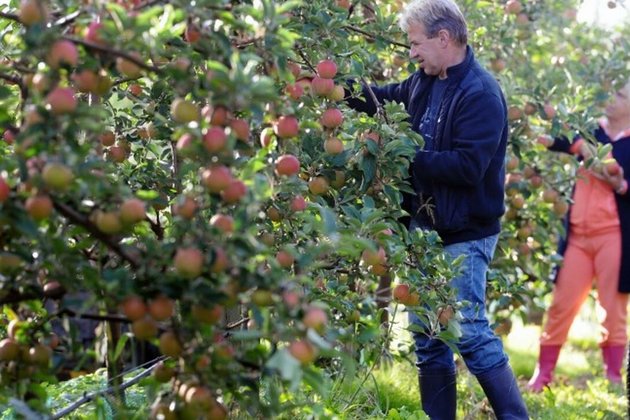 French fruits and vegetables have increased amounts of pesticides over the past decade, a study by an NGO has found. It shows a continuous upward trend in the "contamination" of European fruits, despite the EU's goals to decrease use of the most dangerous products.

"Consumers eating fruits or vegetables produced in the European Union are increasingly exposed to a cocktail of the worst pesticides," the NGO Pesticide Action Network (PAN) Europe wrote in its report, 'Forbidden Fruit', published Tuesday.

"A growing number of products tested every year are found to be contaminated."

Since 2011, EU member states should have been encouraging producers to limit the use of pesticides, and the EU said in 2020 that it would reduce the use of the most dangerous substances by 50 percent by 2030.

However, PAN says that despite EU directives and laws passed in member states, consumers are ingesting more - not fewer - pesticides.

Pesticides on the rise

"Paradoxically, consumers are less and less protected, at a time when the EU is committed to delivering a production and consumption system that is safer for human health, animal health and the environment," the authors of the report wrote.

The data is based on the "quantities of chemical active substances placed on the market", which PAN says does not take into account what is actually on what is being consumed.

France is in the top three of countries that use the most pesticides, according to PAN, with 22 percent of its products contaminated. Only Belgium and Ireland have more, with 34 percent and 26 percent, respectively.

The study shows that "the use of the most dangerous pesticides in Europe is in fact rising, not falling," writes the report. "Laws are being ignored and consumers are being exposed to a rising tide of chemical exposure."

Fruits are more prone to drawing insects and illnesses, and so have more traces of pesticides than vegetables.

The fruit with the "most spectacular increase" of pesticides has been kiwi, according to PAN campaign officer Salome Roynel.

"Kiwis were almost free of these substances in 2011, and today 30 percent are contaminated," she told a press briefing on Tuesday.

European fruits and vegetables with the most pesticides:

The group is calling on an immediate end on the use of the 12 most toxic pesticides, called Candidates for Substitution, including Tebuconazole, a fungicide that is likely to harm foetal development, and is linked to birth defects and miscarriage.

The chemical was found in cherries from Spain, Greece and France in 2019, among others.

Other pesticides have been linked to the risk of developing cancers, heart problems and other serious illnesses, for both consumers, and the farmers who work with them.

The group is calling on an immediate end on the use of the 12 most toxic pesticides, called Candidates for Substitution, and has called on the European Commission to enforce its existing laws on finding less toxic substances or implementing non-chemical alternatives, like crop rotation or mechanical weeding.

But these alternatives "are constantly dismissed", often "on the demands from the agri-chemical industry".

In 2020, France moved to allow sugar beet growers to use neonicotinoids, banned in 2018, to avoid losing half their crops to a virus transmitted by aphids. Neonicotinoids are found to have a harmful effect on pollinators

PAN warns that putting off banning pesticides runs the risk of exacerbating the "pesticide treadmill", where farmers use increasing amounts of chemicals to fight against pests, which evolve their immunity, and therefore require more substances to fight them off.

"Without an adequate response to break down this resistance spiral, the observed trends are very likely to keep rising."