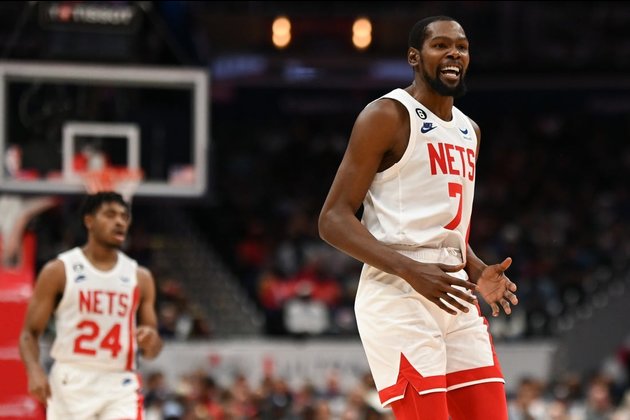 Kevin Durant said he's interested in being part of a future ownership group of the Washington Commanders, his hometown team.

The Brooklyn Nets star and former NBA Most Valuable Player told ESPN that he would be delighted to own a sliver of the team should owner Daniel Snyder decide to sell. Snyder and his wife, Tanya, announced earlier this week they were exploring a potential sale.

Prospective bidders for the team are rumored to include a partnership between Amazon founder Jeff Bezos and music mogul Jay-Z. Mat Ishbia, a mortgage executive who bid on the Denver Broncos when they were for sale earlier this year, already said he's interested. Media entrepreneur Byron Allen, another Broncos bidder, is expected to put in an offer.

Walmart heir Rob Walton bought the Broncos for a record $4.65 billion, and the Commanders are expected to sell for a new record price. In August, Forbes valued the team at $5.6 billion -- sixth-highest in the NFL.

While Durant has career earnings of about $350 million, he told ESPN he knows he could afford just a small stake. And that's OK with the lifelong Commanders fan.

"It would be something nice for my family, and just to have in our family, that would be incredible to be a part of that group," Durant, 34, said. "Just get a little closer to the team if I were to be able to be in that position. Try to learn the business, try to learn from an ownership's perspective and a front-office perspective, coach's perspective, try to get closer to players."

Durant already has dabbled in sports ownership. He holds five percent of the Philadelphia Union of Major League Soccer, a minority ownership of NY/NJ Gotham FC of the National Women's Soccer League and co-ownership of a pickleball team.

But the Commanders are special to him. And he said he thinks the future is bright.

"Our market is incredible. There's a lot of support in D.C., a lot of money in D.C. to be made. I feel like we drafted well the last couple years. We got some foundation pieces that can help you win football games moving forward," Durant said. "I know we've had some losing seasons, but it's starting to come around for us. I'm excited as a fan. I'm excited about the sale. I'm excited to see who they bring in and who they sell the team to and see how we move forward with it."