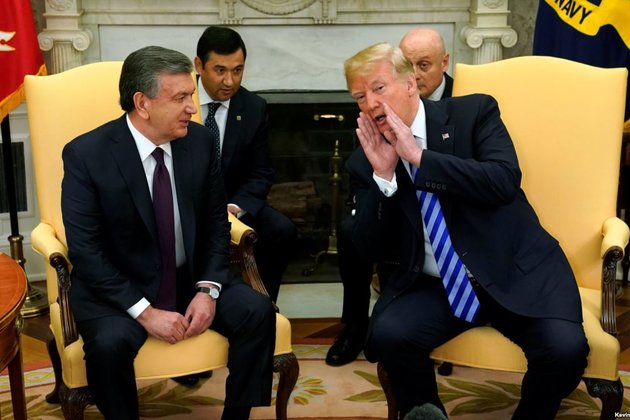 WASHINGTON --Uzbek President Shavkat Mirziyoev declared that progress made so far on improving human rights in his country is 'irreversible' at the conclusion of a White House meeting with President Donald Trump.

In a statement proclaiming a 'new era of strategic partnership' between the two countries issued late on May 16, the White House said that Trump 'recognized Uzbekistan's tremendous progress on important political, economic, and social reforms' since Mirziyoev took over the country's presidency after the death in 2016 of its iron-fisted longtime ruler Islam Karimov.

'These accomplishments have created the conditions for increased economic, political, and security cooperation' with the United States, it said, adding that Mirziyoev during his first official visit to Washington 'committed to implement a comprehensive roadmap to advance religious freedom' in the country.

Mirziyoev said the progress on human rights and freedoms will continue under his policy of putting 'the Uzbek people's interest first' and under his five-year action plan to 'promote good governance, judicial reform and rule of law, economic liberalization, social development, and an open and constructive foreign policy,' according to the White House statement.

The two leaders also recommitted to working together to fight terrorism and promote peace, stability, and economic development in Afghanistan. Mirziyoev said he offered his 'full support' for Trump's new strategy on Afghanistan.

On economic issues, Mirziyoev announced that Uzbekistan is seeking to join the World Trade Organization, and Trump said the United States would provide the Central Asian nations with technical assistance as it continues efforts to liberalize its trade and economic policies to bring them in line with WTO standards.

Mirziyoev, 60, has sought to open up Central Asia's most populous country and move away from Karimov's oppressive policies, making changes as part of a bid to attract foreign investment and improve Uzbekistan's stagnant economy.

For Trump, the talks were a chance to shore up relations with a strategically located country that is courted by China and Russia and was once a key staging area for U.S. operations in neighboring Afghanistan.

'I would say that we are cautiously optimistic, optimistically cautious,' a senior White House official said on condition of anonymity ahead of the meeting, calling it a 'window of opportunity.'

'You don't always get these opportunities in this part of the world, so we believe it's important to try and work with this government and encourage the kind of steps that we've seen,' the official said.

The United States wants to 'provide that encouragement and influence early so we can see more momentum with his reform program,' the official added.

'And if we were overly cautious, and didn't move out in trying to encourage this, that might lose this window of opportunity and we might see backsliding back into the days of Karimov,' the official said.

Prime Minister for 13 years under Karimov, Mirziyoev became interim president after his death was announced in September 2016. He was then elected president in a tightly controlled vote in December 2016.

In recent months, Mirziyoev has taken steps to reform the long-feared security services in the former Soviet republic, and several activists and journalists have been freed after years in prison.

Uzbek authorities on May 12 released human rights activist Fahriddin Tillaev, who had been imprisoned for more than four years in a case that watchdogs called politically motivated.

Tillaev's release was widely seen as a gesture toward the U.S. administration ahead of Mirziyoev's meeting with Trump. It came as Tashkent was also undertaking a marketing blitz in Washington to attract more foreign investment.

While Uzbekistan has made significant strides forward under Mirziyoev, White House officials said they would like to see further progress remedying longstanding problems involving the repression of human rights, forced labor, freedom of religion, and freedom of the press.

"It's critical that basic human rights and freedoms are guaranteed," the senior official said.

The United States wants to 'encourage even more change, more openness, and then Uzbekistan serves as an example for the rest of the Central Asia region, which...is a growing, developing, important region,' the official said.