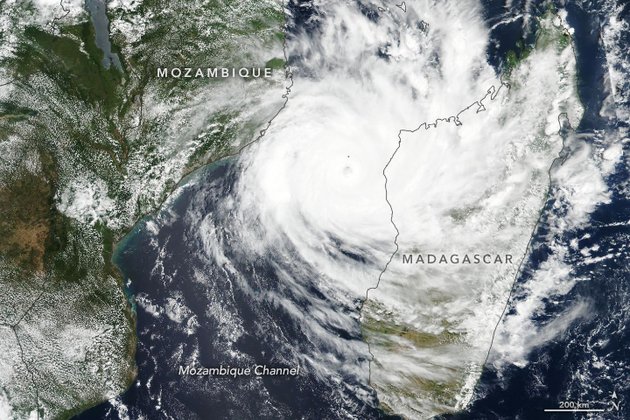 Nairobi [Kenya], Mar 18 (ANI): The toll in Cyclone Idai, which ravaged South Africa with flash floods, sweeping away houses and destroying trees and crops, earlier this week, has risen to 150 in Malawi alone.

United Nations Secretary-General Antonio Guterres on Monday expressed sadness over the loss of life and displacement across Zimbabwe, Malawi, and Mozambique, as a result of the deadly tropical Cyclone Idai.

"The Secretary-General is saddened by the loss of life, destruction of property and displacement of people due to the heavy rains and flooding," said an official statement of the UN.

"The United Nations expresses its solidarity with the Zimbabwe authorities and stands ready to work with them as they respond to the humanitarian needs resulting from this disaster," Guterres said.

The tropical cyclone which made landfall first in Mozambique on Thursday evening (March 14), spread to Malawi, Zimbabwe, and South Africa, affecting around 1.5 million people with its torrential rains and winds that reached the speed of up to 200 kilometers or 124 miles, per hour.

Farmers in the affected areas said that massive losses have been recorded as agricultural fields have been inundated, destroying crop plantations.

According to the International Federation of Red Cross and Red Crescent Societies (IFRC) in Nairobi, the death toll "is likely to change as the full extent of the damage becomes clear. More heavy rain is also anticipated and this may lead to further devastation."A spokesperson for the World Food Programme (WFP), further noted that rescue teams were active on the ground in all three countries, planning to target around 650,000 with food assistance in Malawi, and 600,000 in Mozambique.

Rescue efforts were challenging owing to the inclement weather while the Zimbabwean military forces were being forced to use road transport for providing immediate aid, despite facing challenges and dangers of encountering several damaged bridges.

Zimbabwean President Emmerson Mnangagwa also cut short his visit to the United Arab Emirates (UAE) due to the ensuing crisis and was himself closely monitoring the situation.

India on Monday diverted three naval ships to the port city of Beira in Mozambique to provide immediate humanitarian aid and disaster relief in the wake of Cyclone Idai. (ANI)